How Good is Phuket’s Nightlife? What To Look Out For

Mother nature's best gifts to us include beaches. They are just beautiful, and being on them already has a calming effect.

The wild nightlife in Phuket is a well-known experience and a must-see for travellers because locals are not afraid to take it to the extreme. For those looking for thrills and adventure, you can find everything your heart desires in Phuket! From vibrant nightclubs to modest beer pubs, dinner shows, and sipping cocktails at a beach bar; this magical place welcomes all comers with open arms.

In this article, we will be taking a look at how good is Phuket’s nightlife to give you insight on what to expect and the multitude of activities it has to offer.

The name Phuket derives from the Malay word for hill, Bukit. The island was once known on European maps as Junk Ceylon, a distortion of the Malay term Tanjung Salang, which means Cape Salang. Later, it became known as Thalang, after the island’s principal city. The island was not known as Phuket until very late in its history when the administrative centre was relocated to Phuket, a mining town in the island’s centre.

Long before many other sections of Thailand, Phuket was exposed to foreign influences via trade routes between China and India. The ships would anchor in Phuket’s protected harbours and wait for the northeast monsoon winds before proceeding to India.

Indigenous tribes occupied the central jungle until tin miners ousted them in the nineteenth century. Chao Leh, sea gipsies who made their living by piracy and pearl fishing, inhabited the coastal regions. Chao Leh communities can still be located around the coasts of Phuket and neighbouring islands, despite developmental threats.

In the thirteenth century, Thai soldiers from Sukhothai seized control of the island from the Sirivijaya Empire, which was based in Sumatra, and included Phuket into the Thai nation.

Patong beach’s initial bungalows ushered in the island’s tourism boom in the 1970s. During this time, Phuket was a backpacker sanctuary. The island’s gorgeous tropical beaches and clear, warm waters drew tourists from all over the world. This was made possible by the construction of an airport in the mid-1970s.

Now, Phuket is one of South-East Asia’s most popular travel destinations, with more than three million people visiting the island annually, making it a cultural hotspot for thrillseekers, travellers and everybody in between.

What are the best spots to experience Phuket’s nightlife?

The Phuket way of life is ideal for those who enjoy visiting the beautiful beaches, watching exotic wildlife, and other renowned tourist destinations. It is more than only gorgeous at night, with a variety of activities ranging from shopping to sipping your favourite drink in one of the comfortable bars. One night is insufficient to experience all of the Island’s nighttime attractions.

Phuket Fantasea is the island’s actual dreamland. It is well known as Fantasy of a Kingdom. It conveys tales and intricate stories through performances. The performances are mesmerising with spectacular VFX effects, a well-decorated stage, and lively rhythmic music. In addition to this, the park features gaming shows, themed villages, adventure centres, shopping areas, an elephant palace, and more.

The highlight of Fantasea is the lavish buffet in The Golden Kinnaree Buffet Restaurant’s vast dining room, which seats around 4,000 guests and features two extensive Thai and foreign food spreads. Tiger Jungle Adventure and the Suriyamas Seafood Buffet Restaurant are two other highlights of Fantasea. 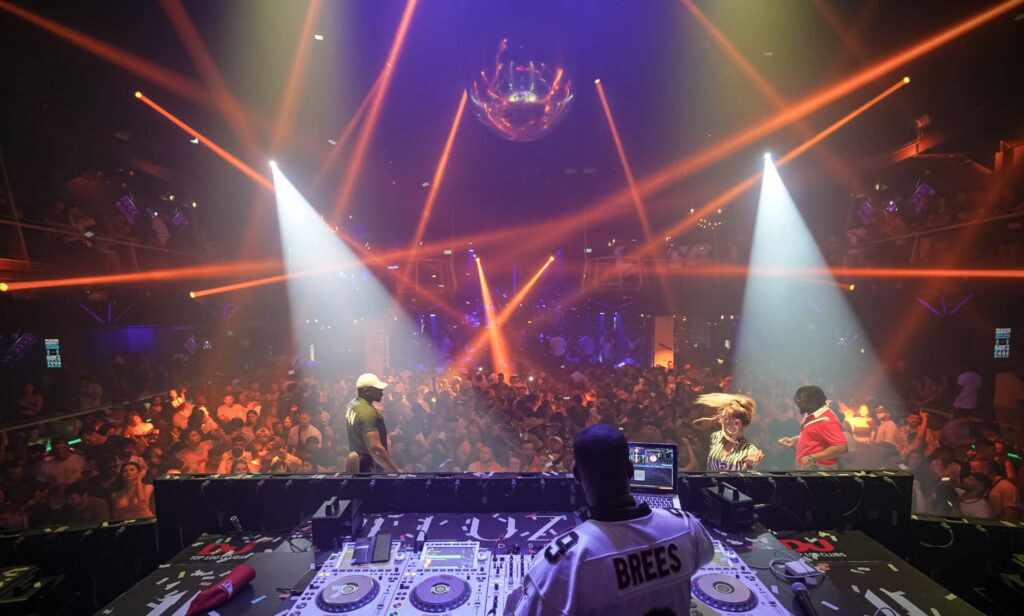 Patong, the infamous nightlife hub of Phuket, may not compare well to Ibiza or even Bangkok, but the mood is far calmer. Nobody cares how you dress or dance as long as you’re having fun. Some of the older, well-recognized names have attained international renown, while younger clubs seem always to offer something unusual and novel to experience — you’ll never be bored in Patong.

The famed Soi Bangla road is a 400-metre strip that comes alive only once the sun goes down. Bangla Road offers an astonishing range of things to see and do, making it appear like anything goes. This street is illuminated with neon lights, and the bars that line it are open to the public throughout the evening. This street is lively due to the abundance of loud music merging into various beats. You may find every type of establishment here, from dirt-cheap beer pubs to opulent restaurants. Here you will find go-go bars (especially on the right alley), discos, pubs, enticing stores, and all manner of other nocturnal amusements.

Along the roadway, you can find street vendors and pamphlet sellers. One of Bangla road’s main attractions is street performers who entertain everyone. There are samba dancers, fire-splitters, hip-hop artists, and magicians during the event.

There are gaming bars where you may relax while playing games such as connect and more. It is nothing but a pleasant street that has something for everyone. In the evening, the roads are closed to all traffic, allowing pedestrians to stroll and enjoy themselves without vehicular interference. Certain portions of it can be pretty jarring, and it is obviously unsuitable for your kids if you’re on a family trip. However, with the appropriate mindset, Phuket is a terrific place for a night out and a barrel of laughter. It is lively, diverse, and flashy, making it an absolute must-try! 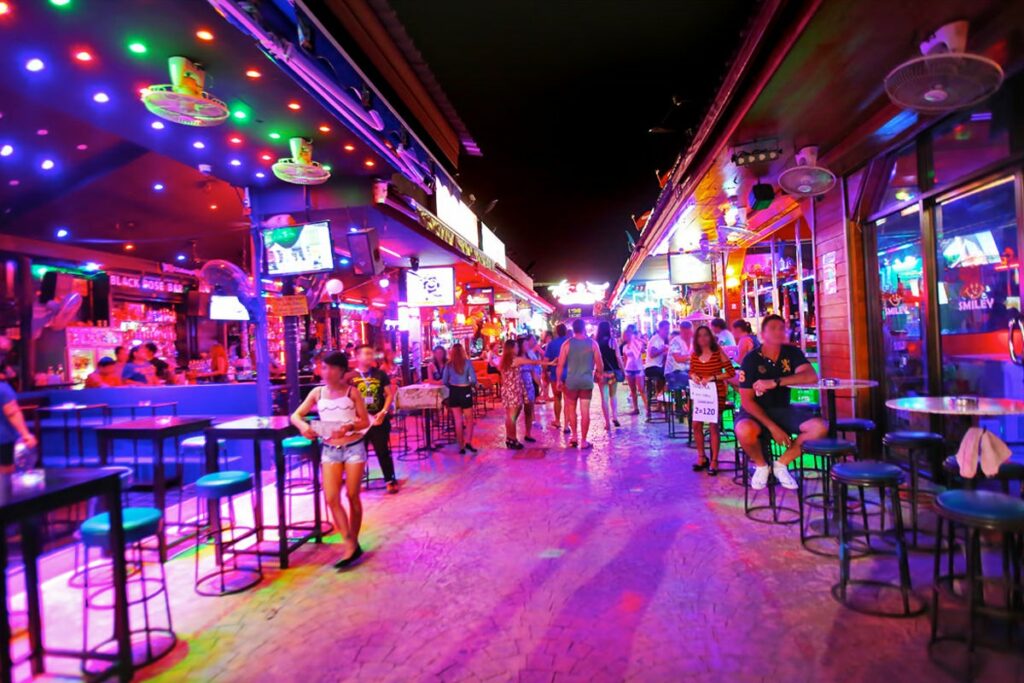 Phuket’s coastline position has made it a perfect site for captivating sunset bars. Numerous sunset bars, such as La Versace, 360 Degree, Downstairs, and Boathouse, dot the cliffs overlooking Patong, Kata, and Karon, three of the most excellent beaches in Thailand. The most popular of these is the Wassa Homemade bar at the Patong Bar.

Wassa, located on the western coast of Phuket and overlooking Patong Bay, is one of the most excellent places for couples to experience the nightlife in Phuket. The vast selection of cocktails, the delectable food, and the calming music make the evening beautiful and romantic.

If you believed that Phuket’s nightlife consisted solely of performances, parties, and clubs, you are sadly mistaken. You can also experience Thailand’s national sport live as part of your evening. Muay Thai, often known as Thai kickboxing, is one of the most adrenaline-inducing sports due to its hard-hitting action. This popular combat sport is characterised by stances such as high kicks to the neck, elbow thrusts to the face and head, knee hooks to the ribs, and low crescent kicks to the calf. Ram-Muay, the ceremonial tradition conducted before the fights begin, is the centrepiece of this exhilarating sport. The crowd’s enthusiastic applause merges with the sounds of the high-pitched Javanese clarinets, drums, and finger cymbals.

If you’re looking for the best nightlife in Phuket and want to experience some sparkle and glamour, Simon Cabaret is the place to go. The performance is cosmopolitan with incredibly gifted dancers and international music, including Thai, English, Japanese, and Korean. The hip ‘ladyboys’ exclusive cabaret performance is a story-telling play that will transport the audience to numerous nations, including India, Egypt, Australia, China, Korea, Russia, and Taiwan. Transgender entertainers take control of the concerts by donning dazzling attire and accessories, and they deliver outstanding performances.

The Cabaret is all about spectacular costumes, beautiful sceneries, meticulous craftsmanship with sets, over-the-top AV effects, and fantastic dancing. At the conclusion of each performance, the dancers pose with audience members for a nominal fee. It is a seventy-minute act that provides the best possible entertainment, parody, and comic relief. The show’s captivating digital music and mesmerising visual effects significantly contribute to Phuket’s nightlife!

Siam Niramit Phuket performs a performance that represents Thailand’s lavish culture. It is a three-act performance depicting the Thai notion of paradise and hell. It is a breathtaking performance that will delight and intrigue you. It has enticing imagery of hell, and the setting is relatively realistic, with boiling water cauldrons and other elements. In addition to the show, there are also floating markets, traditional Thai-style villages, and open-air performances.

The elephants can be fed while walking around. There is also a fine dining restaurant where one may have dinner with a lakeside view following the play. This location will surely be an enchanting experience for children and adults.

Dino Park Mini Golf is one of the fascinating attractions of Phuket’s Kata Beach nightlife scene. This dinosaur-themed golf park is the place to go if you’re a golf enthusiast looking to relax. This is a delightful way to see Phuket’s nightlife with waterfalls, caves, and lifelike dinosaur sculptures. The theme of Jurassic Park inspired it.

Adults and children can watch real-time golf matches, visit the park and kid’s zone, and even relax in one of Marina Phuket Resort’s luxurious bungalows. There are 18 holes scattered across the area, and you may choose your position. It offers a separate room for your children to enjoy while you watch the game. There is an outside café with a Flintstones motif where families can enjoy a substantial lunch.

Multiple highly recommended shops for cost-effective shopping are open in Phuket at night. These night markets offer some of the most incredible prices in all of Thailand. From exquisitely crafted clothing to jewellery, every demand has its own unique solution. These businesses sell local treasures and decorative items that make excellent gifts for loved ones. Moreover, these marketplaces are ideal for shoppers and entertainment activities, as live music is available at the touch of a button, and surrounding markets may have street performances. 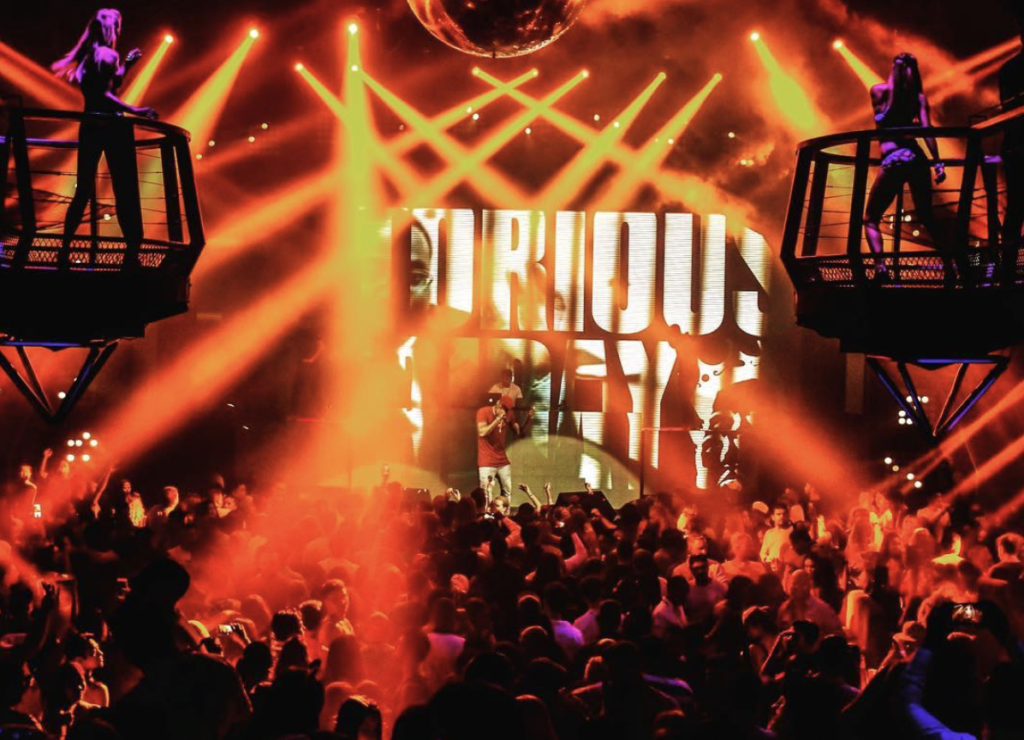 Phuket is the finest site to enjoy Thailand’s many musical traditions. Patong is known mainly for the nightly live music performances that take place every evening. Local musicians of the highest calibre deliver songs that will leave you wanting more the entire evening. Folk music, rock, hip hop, and other forms of electronic music are performed in the highest quality possible. Be free to explore, walk through the surrounding streets, and choose from dozens of similar establishments to listen to some high-quality music. All venues here range from a contemporary aesthetic to a rustic aura.

Are you craving French and Thai cuisine but can’t decide which you want for dinner? White Box offers both French and Thai cuisines, so there is no need to look any further. This restaurant offers a wide variety of cuisine, which is why both tourists and locals continue to frequent it. In addition to these dishes, Phuket restaurants feature one of the most scenic settings on the island, overlooking Patong Bay. This restaurant is regarded as a one-stop destination for dinner, cocktails, and after-partying.

Patong’s 3-kilometre stretch of golden sand is one of Phuket’s most popular beaches. Numerous parasailing and jet ski operators, boat drivers, beach merchants, and masseuses approach tourists lounging on the sand. A row of coconut, palm and tropical almond trees separates the beach from the main road on Patong Beach. This significantly more fantastic area surrounds food and drinks vendors and massage parlours. You may also find beachfront restaurants and pubs serving simple Thai and international dishes, especially around the beach’s centre and the Bangla Road entrance.

The ideal time to visit Phuket’s Patong Beach is between November and April when the sea is quiet and flat. The beach sees big waves and dangerous swells from May to October. On certain days, you may be able to swim, but pay close attention to the red flags displayed on the beach.

If you are in search of a hotel at Patong Beach that allows you to continue your fun late night adventure, then check-in at Kudo Hotel! For a Phuket party hotel that understands how to have fun, go no further than Kudo Hotel’s breathtaking surroundings. We are located directly on the beach in the heart of Patong, putting you at the centre of the excitement. There is no better way to maximise your tropical get-away than by staying in a brand-new Patong Beach party hotel with the best atmosphere and the most luxurious rooms. 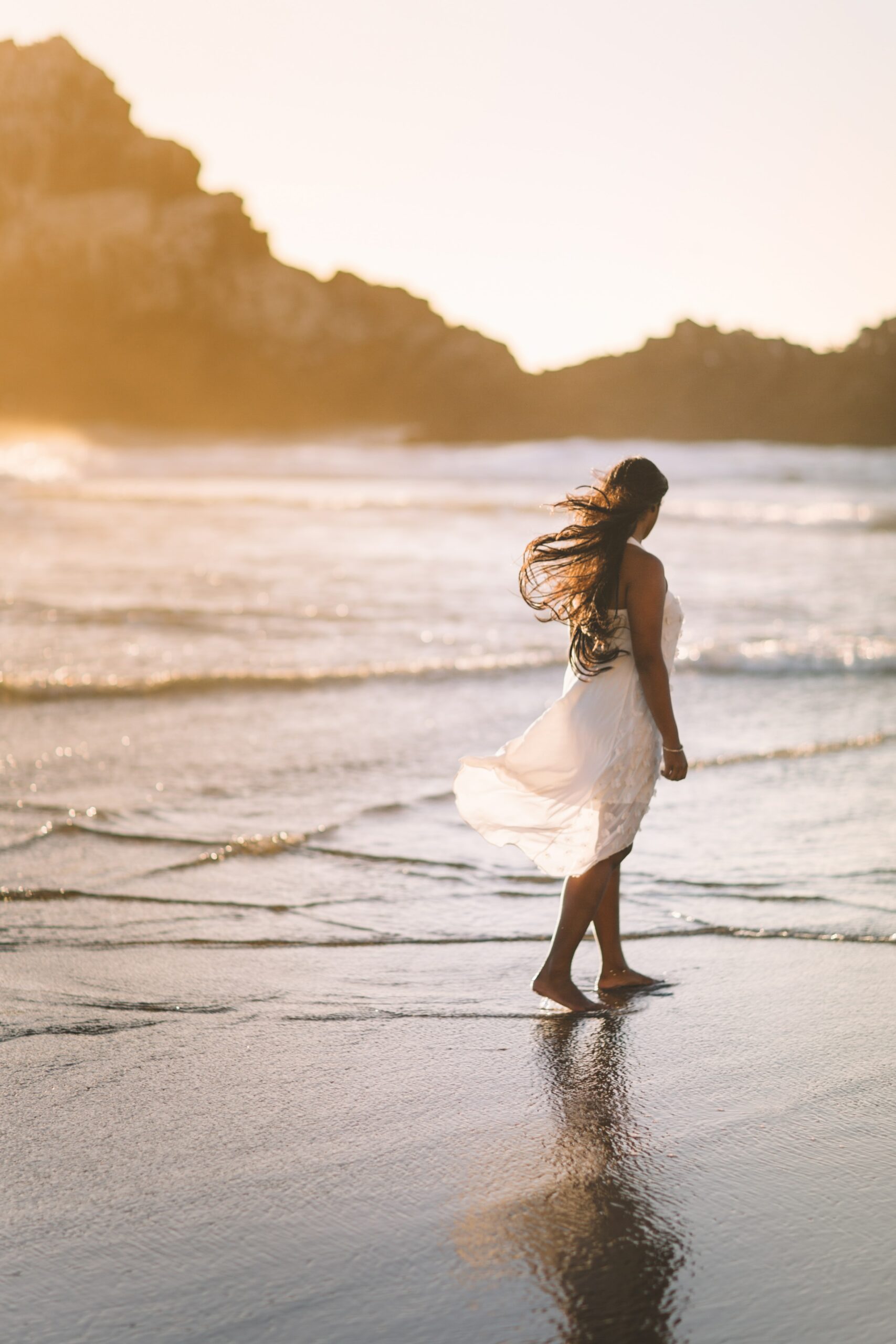 ⇢
How The Beach Benefits Your Health